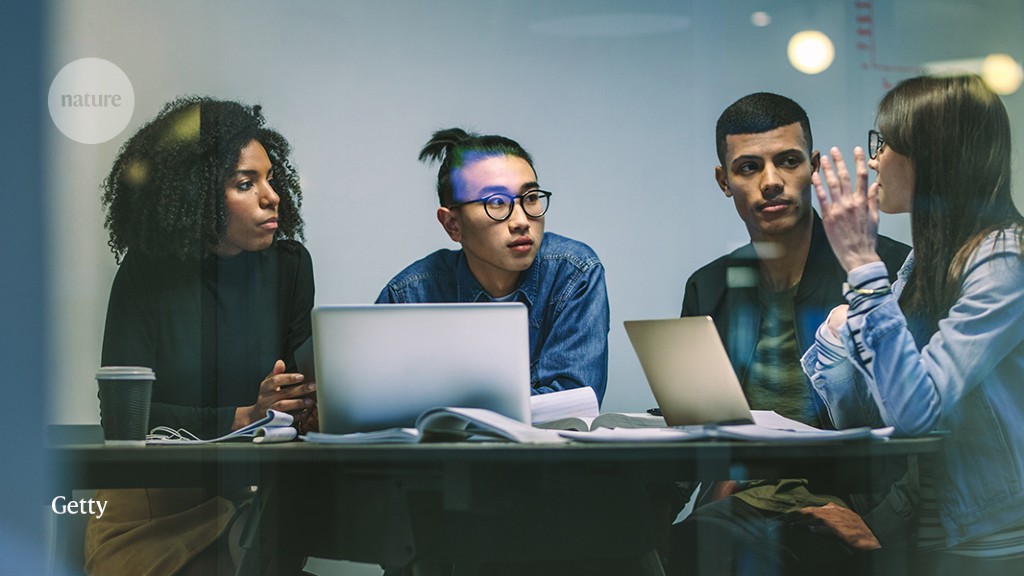 I started my doctorate by wanting to improve not only my scientific capacities, but also “soft skills” such as communication, mentoring and project management. To that end, I have participated in as many social academic activities as I could find, including book clubs, seminars, teaching aids, hackathons, presentations, and collaborations.

I am a PhD student in bioinformatics at the Munich School for Data Science in Germany, under the joint supervision of Bernd Bischl at the Ludwig Maximilian University in Munich and Benjamin Schubert at the Helmholtz Center Munich, the German Research Center for Environmental Health. When I approached them to ask them to gain experience in communication and mentoring soft skills, they offered to co-supervise three master students from Benjamin.

At first I felt overwhelmed, so I just sat down in their meetings and listened. After a few months, I started to offer technical advice on programming. I then started to offer new analyzes and contributions. Eventually, I became comfortable enough to come up with a new masters project based on some of my doctoral research; Benjamin and I are currently interviewing candidates.

I learned a lot from this experience and I am grateful to both my supervisors for supporting me, as well as the students for remaining motivated, determined and friendly throughout the process. Here are some of the things I learned about how to ensure a smooth collaboration and a happy outcome for all of us.

With Benjamin and Bernd, I developed a project plan for each of the master’s students. Writing a two-page plan that ended up looking like a detailed summary for a lecture required us to examine each project in detail and helped ensure that it was possible for a student to complete it during their time. last semester of studies.

If you are a doctoral student supervising other people, sit down with your own supervisor and agree on your respective responsibilities as part of the project plan. At first you may want your supervisor to follow you closely to help keep the project on track, but as you gain experience and confidence you might ask for more autonomy and independence. .

Use the project plan to post the job and find a suitable student: share it online on the group’s website or on Twitter, as well as on your department’s job site. Advertise it to your students if you are teaching a related subject, and sit back and wait for applicants.

We have structured the plans to include a general introduction to the research topic as well as a few key publications. We have described the gap in the literature that the project aimed to fill, with the proposed methodology and a breakdown of four or five tasks to be accomplished during the project. My supervisors and I also agreed and included the specific qualifications applicants should have, and formalities such as contact details, start dates and whether a post was expected at the end.

Benjamin and I decided to offer publishable projects, sometimes as part of a larger paper. We always list the student as one of the authors.

I found that I met most of the students for less than an hour a week, but some might need more attention. Most of the time, Benjamin also joined the meeting. We started with the students by summarizing what they had done the previous week and the problems they had encountered. We then had a discussion and brainstorming session, and we agreed on possible next steps. I’ve learned that I don’t need to solve every student problem (it’s their thesis, after all). Instead, Benjamin and I tried to focus on suggesting things they could try. At the end of the meeting, we made sure that what was planned for next week was clear.

We used the first few weeks to familiarize students with the topic, encouraging them to read the publications listed in the outline, and a few others, to familiarize themselves with the specific methods they would be working with. We also touched on administrative issues such as ensuring students have accounts to access compute resources: networks, email, Wi-Fi, private GitHub repositories, and more.

Good writing takes time, especially for students who are not used to it, or who write in a foreign language. It is important to encourage them to write regularly and to keep detailed notes on what should be included in the manuscript, to avoid missing key details later. We tried to frequently remind our students how the manuscript should be structured, what chapters should be included, how long each should be, what style of writing was expected, what template to use, and other details. We took advantage of our meetings to provide ongoing feedback on the manuscript.

The first two to four weeks of the project are a good time to start writing the first chapters, including an introduction to the topic and basic knowledge. We suggested allocating the last three or four weeks to writing the remaining chapters – results and conclusions – making sure the manuscript forms a cohesive whole, and preparing and rehearsing the presentation for the oral exam.

Probe for a good understanding

In our weekly meetings, or other times when I was teaching, I quickly realized that to ask “have you got it?” Or ‘are you okay?’ every five minutes is not enough. It can even be counterproductive, scaring less assertive students.

I learned to relax a bit and take a different approach: when I explained something, I encouraged the students to explain it in their own words, providing detailed descriptions of a certain task, anticipating possible problems, etc.

In the end, it boiled down to probing understanding of science, rather than giving a talk or grilling an interviewee. Sometimes this approach is useful when a student thinks they fully understand something but in reality they don’t. For example, one of our students had less programming experience than the others, so for the more difficult tasks, we broke down the problem and wrote a sketch of the computer code that they would complete themselves during the week.

Adapt the supervision to the student

Each student needs a different type of coaching, and we’ve tried to adapt our styles accordingly. This could mean using Trello project management boards or a shared Google document to save tasks; define tasks in detail and go through them carefully; or take more time to explain and fill in knowledge gaps. I have tried to lend my support by reminding students that they can always send an email if they get stuck on an issue for too long. One of the students found it very helpful to send short SMS updates outside of scheduled meetings, in order to empower themselves.

Sometimes, if we felt that a student needed to be challenged, we would suggest new assignments that were not in the original plan or encourage them to follow their interest, whether by diving into literature or by proposing other experiments and research questions.

A student did a literature review and summarized the pros and cons of advanced technology for a tracking idea we had. This saved us time when we took over the project after the student left; they learned a lot of interesting things; and the discussion section of the manuscript was much more interesting as a result.

Not all projects can be successful, despite your best efforts (and those of your students). So, as part of each project, my supervisors and I prepared a Plan B (and C), determining which tasks were essential and which were just a nice addition. This included a simpler research question that required less work than the original. The original plan for one of our projects was to compare a newly proposed method with the usual way of doing things, but the new method turned out to be much more difficult than expected, so we decided not to do the comparison. , and we just showed how the new method performed.

Halfway through the project, it is time to assess the likelihood that the thesis will be submitted on time and as originally planned. The top priority is to help the student graduate. This may involve either giving up some of the tasks initially planned or obtaining an extension of a few months if possible.

Have one last round of feedback

After the oral exams, Benjamin and I met to decide on the students’ final marks based on the college rubric. We then met with the students one last time to let them know our decision, going through each item in the rubric and explaining the reason for the grade we assigned. We tried to remember relevant events from the past few months so that each student felt the grade was right.

We also remembered to ask the student for feedback on our supervision and to suggest things they thought we could do better.

Finally, I encouraged these students to apply for vacancies in our lab and offered to write letters of recommendation.

– $ 0.12 in earnings per share expected for iHeartMedia, Inc. (NASDAQ: IHRT) this quarter